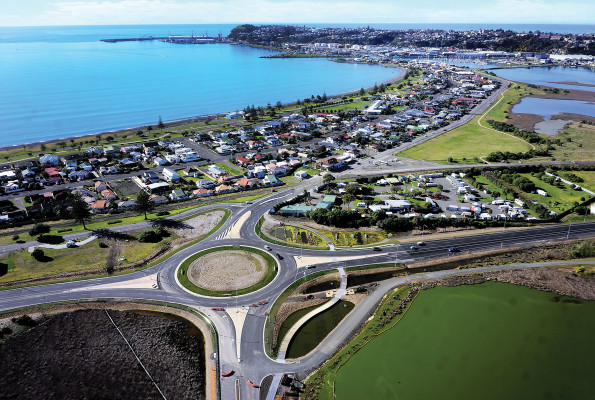 The $13 million safety improvement project along a section of SH2-SH2B in Napier was co-funded by the NZ Transport Agency, Napier City Council and Hawke’s Bay Airport, and completed in September last year. Its location provided several complexities, given its position next to an internationally recognised wetland and the need for traffic flow to continue during construction.

The planning team, which included WSP Opus, BECA, Stantec and Higgins had a number of key objectives to achieve including a safer road, increased traffic growth to the expressway and airport, enhancement of the wetland environment and provision of a regional gateway to Napier and Hawke’s Bay from both road and air.

Transport Agency Senior Project Manager Rob Partridge says they are thrilled with the recognition the project has received and such a successful outcome would not have been achieved without its project partners.

“The previous intersection was among the most high-risk intersections in New Zealand, this project has made it much safer and more efficient with a new roundabout, widening and strengthening of Watchman Road, and a new airport access road. We now not only have a safe intersection, but one that preserves the environment, visually tells our story and provides a fantastic new gateway to the Hawke’s Bay region,” he says.

“The Transport Agency could not have delivered this project to such a high standard without our key consultants and contractors, Opus, Stantec and Higgins, or our key partners and advisors, Mana Ahuriri, wildlife expert Tony Billings and artist Jacob Scott.”